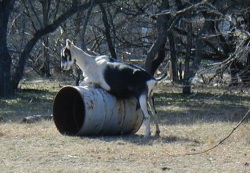 Trying to Have Itself Over a Barrel; image by plong (http://www.flickr.com/photos/plong/)

According to Wikipedia: over a barrel means to be in a predicament or helpless in a situation where others are in control.

It seems rather amazing, then, that it is possible to have oneself over a barrel.

But groups who are ill-advised in game theory manage it all the time. I speak of no lesser assemblies than the EU Parliament and the US Congress (the subject of another post)

The EU actually managed to have itself over a pork-barrel. Pork-barrel spending is probably as old as politics itself, and 120 years ago  Gustave Le Bon described it thus [1] in a chapter on the crowd psychology in parliamentary assemblies:

“In addition to this first cause of an exaggerated expenditure there is another not less imperative — the necessity of voting all grants for local purposes. A Deputy is unable to oppose grants of this kind because they represent once more the exigencies of the electors, and because each individual Deputy can only obtain what he requires for his own constituency on the condition of acceding to similar demands on the part of his colleagues”

So if this is pork-barrel 19th-century style, nowadays it is a bit more discreet: It is usually slipped into laws everyone agrees on, at a late stage of the debate. Some (group of) politician(s) threatens to withhold to vote favourably on a law that otherwise no-one could disagree on, unless the nonsensical addition, which would normally be voted down, is also included.

The MEPs have managed to pork-barrel the bonus curbs condition into the vote on the Basel III capital rules, while the capital rules had been agreed on a much larger internationally level already. Now, I am not suggesting that the MEPs didn’t think the bonus curbs were useful. Some of them surely did. But, having linked the rather urgent and important Basel III agreement to them, they do have themselves and the rest of the EU over a barrel on the time-scale of the bonus curb drafts:

The somewhat nonsensical and ineffectual language of the bonus curbs proves too popular with the electorate to take them out now, and Basel III is too urgent to take the time to make the curbs effective and sensible. We can’t imagine Basel III being voted down, nor imagine it being voted for without the caps (the MEPs having successfully held themselves and everyone hostage). But with an in-effective pork-barrel, we have reached a new level: We are only getting the smell of pork; We aren’t even getting the pork!

What I mean is that as they stand, the bonus curb can be by-passed, they are harmful to the EU as a place of doing business (at the very least for foreign banks), and they do not achieve the original goals of making banks safer: Some argue that banks become even more dangerous as the decrease in variable costs is compensated by higher fixed costs (salaries), which undoes some of the benefits the higher capital buffers of Basel III were meant to create (ultimately a smaller chance that banks fail or have to be bailed out) [2].

This is regrettable, for there is probably a need for a proper legal framework on executive compensation: The idea that shareholders need the ultimate say in executive compensation is laudable, the idea that there is no absolute cap that politics should set (as is the case with the banker bonus curbs, as I understand), is also sensible, and the idea that banks could actually be made safer through giving people incentives to make it so, who was going to argue with that? Alas, it would have required a sensible, open, and focused discussion to make it both useful and cognizant of the realities of the international context, not — as it was — a clubbing together of MEPs, slipping a hasty draft into an already agreed, urgent, and important framework, and putting ultimatums up to the other decision makers.

[2] The effect might be over-estimated. The total amount of bonuses exceeding the cap is relatively small. Nonetheless, increasing the fixed salaries even of only the top few hundred of employees does not make banks safer.