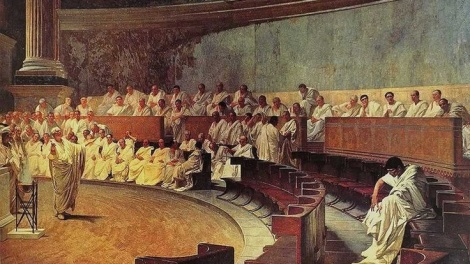 It’s often been said in the last days that Greece represents less than 2% of the Eurozone’s GDP, so we shouldn’t spend so much energy on the whole Greek situation, and simply let the Greeks decide whether they want to play ball or not.

That, in my view, would be a grave mistake, not because Greece is so important (although it is, strategically and politically), but because the outcome of the Greek debate will be symptomatic for the larger diseases that may or may not have befallen the construction of the Euro and the political structures around it, and because sending the ‘wrong’ signal via the ‘wrong’ outcomes of the Greece-negotiations will lead to a real (and justified!) confidence crisis, with very real impact on European debt financing rates and foreign direct investment into the EU. Importantly, to realise that it would be a grave mistake, we have to realize that Greece really isn’t bluffing in one important aspect of the negotiations.

The Greek government has finally found its way through all the confusing details of the negotiations (and all the noise internal to the Syriza party), back to rediscovering what their true agenda was: No deal without true debt relief. That provides hugely unwelcome clarity in Brussels, but clarity nonetheless. Some in Brussels still hope it’s a bluff. It is not. To the Greeks, the action of rejecting a roll-over is over-due, intellectually honest and common sense: The roll-over (to add insult to injury, it’s often termed ‘aid’) does nothing but to allow the institutions to pretend their ‘assets’ (i.e. the previous loans to Greece, which the institutions extended only to bail out private bond-holders with public money) are still intact. It doesn’t help Greece in any real sense at all; It helps the accountants of the IMF, and helps the ECB pretend that Greek government bonds are still good collateral, making it easy to justify keeping the Greek banking system alive without breaking any existing rules. A well engineered, but sick-to-the-core solution to avoid recognition of the real problem.

The institutions, however, seem bent on betting that the Greek public is too fearful of a Grexit to allow Athens to default and thereby force the institutions into admitting their losses anyway. From my observations on the ground, I’d say the public in Greece no longer care how this gets resolved, as long as whatever happens next gives the illusion of closing the chapter on a five-year period of uncertainty. The situation is symmetric with that of the other European tax-payers: Everyone’s had enough of the crisis, is worn out, and just wants it to go away. And therein lies the danger. While politicians probably truly believe an amicable solution will be found in the 11th hour, the will to resolve things amicably is evaporating among the electorate everywhere. The Greek government has the public at the very least in a place where the crowds won’t resist anything that looks like real change. The Eurozone has the public in a place where real debt relief looks more and more difficult to get through. We have a population on both sides willing to walk into a complete disaster. A default and a Grexit don’t make the problems go away. They make them worse. Debt relief, by comparison, looks like a cheap, long-term solution.

Indulge me, and go along for the moment with my assertion that Greece isn’t bluffing, but would do almost everything Europe demands, if only there were real debt relief on the table. If so, then the choice becomes mind-numbingly simple: Either the institutions own up that Greece can’t pay, or Greece will own up to it.

Put differently, it’s time for the Eurocrats to think through their next and second-next moves. When they do, the choices do become crystal clear:

(1) If we allow Grexit, the questions that will have to be answered are: (a) do we bail out the banking system? (b) do we enforce capital controls and how? (c) how can you enforce a Greek depositor haircut, (d) have the Greek public already been given too much notice and ‘rescued’ too many of their assets into a space outside the banking system? If so, how can we legally make them take a haircut too? (e) Do we need to push for Grexit at all or allow currency subtitution? (f) How do we keep political and strategic influence in the region? (g) Is it the end of European expansion? (h) will Greece block things like sanctions against Russia and other unhelpful things whenever the EU rules require unanimous resolutions? (i) Will investors shun Spanish and Portuguese government bonds now, fearing that there may be move victims, with the inevitable result that these countries may now need public bail-out loans? etc. etc.

(2) or: do we eliminate all these rather painful and dangerous questions by giving true debt relief, thereby avoiding default, and avoiding the question of Grexit altogether. It’s costly, but less costly than a Grexit. On the plus side, the ECB will not have to violate its mandate. On the minus side, the IMF may have to be bailed out by Brussels, which will make for lively discussions, and elections in Spain may go the ‘wrong’ way, encouraging another left-wing outcome because Greece is seen to have pushed hard and got away with it.

On balance, it is an absolute, screaming no-brainer, and the sooner people get their head around this the better. Why on Earth no-one seems to be honest about what lies two steps ahead is beyond me. The Eurocrats are pretending to walk into a jungle full of beartraps of their own making. But their pretense is so successful that they have their electorates behind them in their fervor! It is, in my humble opinion, borderline insane to even consider not giving in, to not prepare the electorate to accept that the money is lost, because Greece will rightly force us to own up to it anyway. If we allow German voters to shoot the messenger (Greece), then in step two animosity across the continent is going to increase even more once we have to face all these questions thrown up by a default (item (1) above).

Martin Wolf points out today that “The outbreak of the First World War was greeted with confidence and jubilations by people all over Europe”. In risk-management courses, I often use the example that no-one at the beginning of the Second World War had an inkling that they were at the edge of something momentous. Something similar does indeed seem to be happening with the Greek debate at the moment.

I am in no way saying that the current deliberations over Greece will ever be the cause for anything bad in Europe, whatever the outcome. That would be to confuse the symptom with the disease.

The outcome will simply provide the answer to the following extremely consequential question: Does the will to solidarity and ever-closer union stop at a problem as small, as nearly irrelevant as the write-off of the Greek debts held by the IMF and the ECB? If the answer is yes, the Euro is indeed doomed far beyond Greece. If the answer is no, the Eurozone — as fragile as the legal construction is — may not not be sick quite yet.

So if the Greek government sounds alarmist to you when they say a lot more is at stake, do not confuse the symptom with the cause, the trigger with the ultimate cause, or the credibility of the messenger with the credibility of the message. Where Europe ends up in regards to the Greek question is nothing more and nothing less than an acid test of where Europe is heading more generally. Greece is not the cause, nor is it the kingpin. But the way this crisis gets resolved will give crucial answers to crucial questions. Politicians, voters, and investors will not forget the answers we will be given over the next few days.

2 responses to “Greece: Why is it so important?”