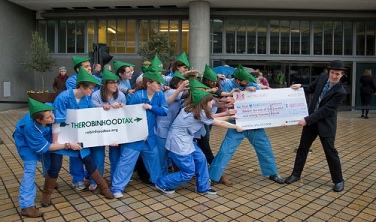 In an old post, I speculated that the EU transaction tax (FTT) will quietly go away. I feel endorsed now that Mervin King hints that Europe would use delaying tactics to kick the FTT into the long grass, adding that he knows of no central banker who thinks it’s a good idea, and that many politicians even in those countries who signed up are now privately sceptical.

Wolfgang Schäuble comments, notably in an election year: “We are just beginning this discussion. It is not a major concern to be very frank,” he said. “This year, next year … it’s not (a) major problem.” He is trying to go cool on the topic.

Sitting in Valletta’s new and picturesquely designed waterfront, explaining to some friends why this FTT such a bad idea (they don’t need to be told: Malta has rejected the tax in 2011, as does their current government), I suddenly thought there is an easy way to look at this or any new tax: It should be looked at the same way as any new government spending or stimulus, and that is through the fiscal multiplier effect.

In economics, the fiscal multipler is the ratio of a change in national income to the change in government spending that causes it

So let me define my own fiscal multipler for the analysis of tax impacts thus:

In tax policy, the fiscal multiplier is the ratio of a (negative) change (drop) in national income to the change in tax burden that causes it

In the usual definition, applied to government spending, if we end up with a stimulus dollar precisely becoming a dollar of private income, that’s a multiplier of one. So in my definition, applied to taxation, I’ll just say if we end up with all the tax take in the hands of the government and precisely the same amount goes missing in the private sector, it’s a multiplier of one. Such a tax would be precisely on the boundary between harmful and useful, perfectly harmless and perfectly useless. (assuming the tax revenue gets put to a good and simple purpose like paying back national debt).

A useful tax is one where the collective damage to the economy (including the cost of paying the tax) is less than the benefit of earning the tax revenue in the name of the government . It has a fiscal multiplier of less than one. A harmful one is the opposite and has a fiscal multiplier of more than one. A tax with a negative multiplier is certainly also possible, and would be hugely beneficial (increasing both tax revenue and aggregate economic activity).

So let’s estimate the fiscal multplier of the FTT: We start with the observation that the projected annual revenues are €35bn

(1) Sweden, the most studied example, found that the aggregate financial sector activity dropped to a level where the net effect on tax revenues was negative. Sweden is a famous but old example, but more recent ones in Italy, France, and Hungary go in the same direction (even if the final numbers on aggregate financial sector tax take are not yet in, in these countries). For this to be the case, economic activity has to drop not just by the loss of tax paid to the government, but then again by more than the inverse of the tax on the additional loss in economic activity. Let’s call this corporation tax rate, for simplicity. So We revise: [FM = 1 + 1 / tax rate  + (other costs – benefits)/actual_FTT]. Let’s say corporation tax is 25%, so we have [FM = 5 + (other costs – benefits)  /actual_FTT]. (*)

(2) On top, there are costs to governments, in terms of increased cost of financing government debt. This debt will have to pay a higher interest to compensate for the impact of trading costs and lost liquidity. So some countries are now proposing to exclude government debt, which just proves that private sector companies entirely outside the financial sector will be burdened by the same increase in debt funding costs that governments are now realizing they need to avoid. Again, this is a cost to the real economy. As an approximate figure, we estimate private sector non-household debt to be between 1.5 and 2x government debt, which is more or less the standard for highly developed OECD countries. And let’s say that government’s want their debt excluded because it would increase their funding costs by 1/2 of what the tax would bring in. I know it’s a crude estimate, but better ones aren’t available and we have to impute numbers from observed policy behaviour. Then we have [FM = 6 + (other costs – benefits)  /actual_FTT]

(3) On top of that, the evidence of Sweden shows that reduced capital gains taxes alone (in countries where they do apply) can offset the FTT altogether. Therefore, we revise further [FM = 7 + (2 x other costs – benefits)  /actual_FTT]

(4) On top of that, the UK has calculated that, if it were to charge the EU for the cost of implementation, the EU would pay more than it would (expect to!) receive in tax from the UK. The same argument certainly applies to any country with a less concentrated financial sector like the US. China would bother neither to raise a legal challenge, nor to collect the tax. [FM = 7 + estimated_FTT/actual_FTT + (2 x other costs – benefits)  /actual_FTT], or, since actual_FTT < 1/2 estimated_FTT [FM = 9 + (other costs – benefits)  /actual_FTT]. And since most trading is (and will be) happening outside the EU, the relative cost to benefit for the trading inside the EU-11 is even worse. So this is again a conservative estimate.

(5) On top of that, the EU itself has calculated that an average private pension would be worth 8% less with the FTT than without. Someone is bearing that cost. According to the OECD insurance statistic, just insurance and pension fund assets alone in the EU-11 countries which signed up to the FTT are around €2.5tn. A reasonable estimate would be that about 8% of that is used to pay pensions every year (remember, there is also new money coming in every year), so the impact on insurance and pension assets would be €16bn p.a. [FM = 9 + €16bn/actual_FTT + (other costs – benefits)  /actual_FTT]. If actual FTT is about 1/2 of expected FTT (which in France, Italy, and Hungary it is, and worse), then

In other words, unless the non-financial benefits or non-tax benefits of the tax outweigh the actual tax by at least an order of magnitude, the tax is a very bad idea indeed. The benefit of reducing high-frequency trading, for example: Is it really worth ten times the tax we collect? Surely, you can just regulate against high frequency trading with a much, much lower cost.

Argue with any one or two of the observations above, and in aggregate you are still left with an FTT as an exorbitant policy failure. The problem in this case is that the measure is popular, populist, and extremely complex to understand. But the fact that the public doesn’t shout “it’s a bad idea” doesn’t mean it’s a good idea. It’s popular, because no-one “feels” the pain, but that does not make it a responsible policy when the fiscal multiplier is so huge.

My prediction, now hardened by numbers, still stands, and agrees with Mervy King’s. When more an more people have worked through these complex financial costs and legal and operational complexities, the proposal will end up well lost in the long grass. Or at least we must hope so.

(*) It is important to note that this does not necessarily mean a humongous drop in economic activity. In Sweden, the tax take was only 1/10th of what it was projected to be, so net private income had to only drop by 1/2 of the projected tax take to take the fiscal multiplier all the way up to five.

One response to “The Financial Transaction Tax and the Long Grass”